My list, it seems, will be appearing in a trickle rather than a torrent. But to the five names already fondly noted I now add one more:

JUDY GARLAND
Judy Garland’s presence on any list of entertainment bests or favorites hardly needs to be defended. Her permanent spot high on the A-list of show business icons is what you might call unassailable. And given my tastes, proclivities - whatever – when I have to name the greatest entertainer of all time, it’s not gonna be Bob Dylan or Doug E. Fresh. It’s gonna be Judy. Case closed. Once she’d embarked on her historic career as a concert performer, she was often compared to Al Jolson. A comparison I always thought did her a disservice (even if it was meant as praise).Though it’s a matter of record that both electrified audiences, I’ve never ever warmed to Jolson. Even aside from the (now) cringe-inducing reliance on black-face, he’s always bugged me with his preening, overbearing schtick. Smarmy. Smug. Unctuous. Abrasive. Manic and relentless. Deeply in love with his own bombast –and frighteningly naked in his need to be the sole focus of attention. But there’s not an ounce of sincerity – or warmth - on any positive emotional level. No matter how energetic his attack, how ringing his diction or how raging his self-adoration. Judy Garland presented a decidedly different image. She both projected and transcended ego. It was possible to feel both awestruck and complicit in a Garland performance. Where Jolson demanded that you sit back flabbergasted, Garland held you in a kind of embrace. She was the show business equivalent of a perfect storm. The focal point for an amazing convergence of qualities. Vulnerability. Sensitivity. Power. Razor-sharp wit, much of it self-deprecating. Instincts that allowed her to create a stunning sense of spontanaiety. Add to it that incandescent face, with its beguiling arrangement of features - above all, those huge expressive liquid eyes. And – of course - the tender, nervous energy that made her seem just that much more alive than anyone around her. She was an amazing, intuitive actress. And as a singer, in a class by herself. That voice, with its throbbing power could switch from jubilation to intimacy on a dime. Her rhythmic instincts were prodigious. And, of course, to say she knew what to do with a lyric is like saying Shakespeare knew what to do with a pen. In the space of a line or two, she could break your heart – and restore it.
Of all her films, MEET ME IN ST.LOUIS is probably her most profoundly perfect vehicle. It’s an ensemble piece. Yet Judy never shone brighter. Because, unlike Jolson, who – in films – always conveyed the feeling that other peoples’ lines were barely endurable nuisances, she knew how to share a scene – thriving on the interplay with her co-stars and coaxing the best from her partners. It’s a generous talent. And that generous spirit is what lights up all the other facets of her art. Making her the best of the best. Of course, it’s wonderful that she was at MGM just when the Freed unit was creating movie musical history. But that history would have had considerably less luster without Judy Garland. She had some great vehicles. THE PIRATE from 1948 is probably the most intoxicating hothouse flower the studio ever produced. But even when the scripts were weak, Judy could be counted on to bring some degree of greatness to the proceedings. For instance, TILL THE CLOUDS ROLL BY, the cloying Jerome Kern biopic from ‘46. Stuffed with stars, songs and sanctimonious pronouncements from Robert Walker and Van Heflin. Judy pops up for 15 or 20 minutes in the middle, playing Broadway legend Marilyn Miller . A couple of songs, a smidgen of dialogue and she’s gone 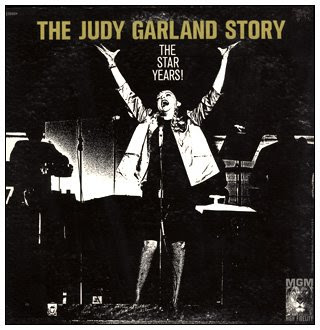 . But for as long as she’s there TILL THE CLOUDS ROLL BY is 24 karat gold. Her final film performances were among her best. She responded brilliantly to director John Cassavetes in A CHILD IS WAITING(1962) And I love her last film, I COULD GO ON SINGING(1963). A wonderful gift for her audiences. The script gives us a look into the life of a singer just like Judy Garland. Except, of course, that nobody else is just like Judy Garland. There is and always will be only one. Her big emotional scene with Dirk Bogarde near the end contains some really magnificent acting. And – perhaps most memorable of all - the moments when she’s preparing to go onstage, building her own momentum and excitement, willing herself to deliver that legendary two hours of "pow!". Her Carnegie Hall and Palladium concerts were never filmed. This footage makes us feel we’re there beside her.
Judy Garland sent her laser beams (pink and amber, no doubt) up to snowy northern Ontario to find me when I was still a child. I don’t quite know how or when I first capitulated. I recall seeing THE WIZARD OF OZ at the Royal Theatre in the mid-50’s. But from that experience what dazzled me most then was the hallucinogenic redness of those ruby slippers. I must have seen a couple of her films on television. Whatever the case, by the time I was 12, I had two of her LP’s (Garland at the Grove and Judy!That’s Entertainment!), knew every note of each of them and was happily in thrall. I remember excitedly cutting out clippings about the amazing comeback tour that would eventually culminate in her triumphant Carnegie Hall concert. And I can still recall walking miles along the railroad tracks to the next town to pick up my feverishly anticipated copy of JUDY AT CARNEGIE HALL on the Saturday morning it arrived.. No one I knew cared two pins about her. But - unerringly - Judy found me and spoke to me in a language I didn’t even realize I knew. Just as she inevitably found others in other small towns. A few years later I was off to the big city – with a sensibilty partly shaped by my Judy Garland experience. She helped so many of us realize where we wanted to be. Someplace else. And soon I was. For good.
Posted by CanadianKen at 11:40 PM 2 comments: