1982: The Overlooked -- LAINIE KAZAN in My Favorite Year

LAINIE KAZAN in My Favorite Year 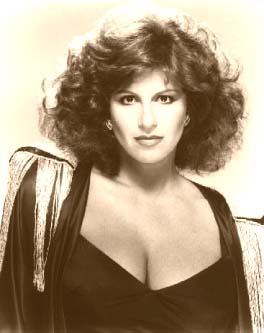 When Barbra Streisand exploded into prominence in the early 60’s, the entertainment world had never seen anything quite like her. Record companies scrambled to find cookie-cutter clones. In the end, what they unearthed was a number of young female singers – some gifted, some not so much – who operated in the same general show tune/cabaret ballpark. Commercially, none of them really ever hit it out of that park. Streisand’s staggering once-in-a-generation success wasn’t an act anyone was likely to duplicate. But some of them produced fine recordings and built nice little careers for themselves. Names like Lana Cantrell, Marilyn Michaels and Bobbe Norris twinkle honorably in the outer reaches of the 60’s firmament. With the exception of the talented Roslyn Kind (who actually WAS Streisand’s half-sister), none of these ladies stood quite so squarely in Barbra’s shadow as Lainie Kazan. She understudied her in Broadway’s Funny Girl. Who knows how many times she actually went on for the star? But it’s safe to say it would have been some scary mission to win over a packed house of Streisand-hungry paying customers who’d just been told their idol wouldn’t be appearing that night. If anyone was equipped to pull it off it was Kazan. Judging from the marvelous singing voice evident on her LP’s and the enormous comic talent she later revealed onscreen, it seems likely she would have made one hell of a Fannie Brice. 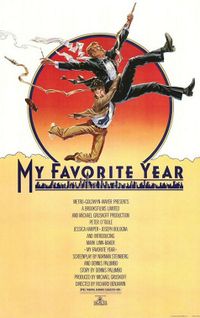 Kazan's bigscreen credits in the 60’s and 70’s were negligible. But a solid gold opportunity finally came her way when she was offered the role of Belle in My Favorite Year. It’s the part that became her calling card. The picture itself was the year’s most engaging sleeper, merrily immersing audiences in the backstage chaos of a 1954 TV variety show. Constructed around a sharp, funny, observant screenplay, it radiated nostalgic charm. Even the title was adroitly chosen. It’s a nice idea having a favorite year. Makes you pause and think about what your own might be. A sweet concept – and one that pulls you into the film from the get-go.
Major credit’s due to director Richard Benjamin, who made a series of very wise choices. One of which was the brilliant use of Nat Cole’s thrilling version of “Stardust” to open the picture. The arrangement’s achingly beautiful, priming us for an experience that uses comedy as an integral part of something warmer and richer.

But it was in the casting that Benjamin really hit 24 karat paydirt. Peter O’Toole was a pluperfect fit as Allan Swann, the ruefully boisterous, disaster-prone and ultimately endearing swashbuckler, Mark Linn-Baker, a terrific new discovery as Benjy, the junior writer assigned to bring him back alive –and sober. Joseph Bologna is beyond wonderful – way beyond – as King Kaiser, a Sid Caesar style TV star. Wrapped in a sort of cagey befuddlement, dispatching insanely inappropriate gifts to his staff and – in the end – game for anything. It’s a brilliant, one-of-a-kind creation. Caesar himself couldn’t have hoped for a warmer, funnier tribute. And it’s absolutely unfawning. [Aside from Bologna, the field of potential supporting actor candidates in ’82 was astonishing – Mickey Rourke(Diner), Rutger Hauer (Blade Runner) , Jack Warden (The Verdict). Amazingly, not one of them was even nominated. But I’d say they could have mass-produced the trophy that year and given each of these guys one of his own.] My Favorite Year also spotlights uproarious turns from veteran Cameron Mitchell, a grimly funny gangster and frog-in-her-throat wardrobe lady Selma Diamond. Plus a lovely bit from 30’s star and future Titanic icon Gloria Stuart. 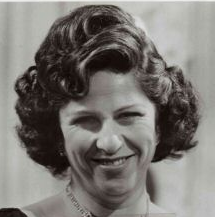 Even in this illustrious company, Lainie Kazan stood out. And not just because she was 5’11”. Kazan plays Belle, Benjy’s flamboyant Brooklyn mother and she plays her to the hilt. It takes an actor who’s both brave and gifted to pull off a broad stroke performance. Over-the-top efforts by lesser lights are inevitably embarrassments. If you don’t have the helium to begin with, the balloon’s still gonna be enormous but it ain’t ever gonna fly. Belle embodies one of cinema’s archetypes – the Jewish mother. Alarmingly loving, overbearing, regally tacky and armed with an endless supply of straight-faced sour pickle one-liners worthy of a Borscht Belt headliner. Of course, there’s also the usual to-do list for her son, either explicitly stated or strongly implied:
He should be a doctor or a lawyer.
He should marry a nice Jewish girl.
He should EAT! EAT!

For me, it’s a stereotype with plenty of mileage left in it. Unlike, say, the bimbo chorine of Victor/Victoria. Getting laughs out of that one is like trying to squeeze them out of a Brillo pad. Chances of extracting honest-to-goodness sentiment from it are even slimmer. But it’s different with a Jewish mother. The possibilities for hitting a chord are there in spades. After all, Jewish or not, most of us have done a lot more interacting with mothers than with chorus girls.

Whatever the case, Kazan surveys the territory, decides there’s gold in them thar hills and proceeds to mine it with pick, shovel, dynamite and a little seltzer. She’s Hurricane Belle, bulldozing Benjy into hauling celebrity Swann out to her Brooklyn lair for a family dinner. The potential for a disastrous collision of incongruities never enters her mind. Because, when all’s said and done, Belle’s proud of herself and her brood. And sees no reason why Swann shouldn’t take a shine to them too.

She and Benjy operate not just as mother and son, but as a well-oiled comedy duo, too, with Mom the inevitable top banana. Kazan’s Belle emerges with door-filling grandeur, the hostess gown she’s stuffed into a compelling argument against the theory that black is slimming. But that just qualifies her all the more to preside over the dinner party. It’s her big showpiece.
She’s clearly proud of her Benjy. But that doesn’t stop her from swatting away his opinions and asides, treating them like heckling mosquitos at a Catskills picnic.

Belle: “Welcome to my little chapeau”
Benjy: “Two years at the Sorbonne and she still can’t get that one right.”

Her kingdom’s a matriarchy and she sends out maternal rays that entangle the evening like the arms of an amiable octopus. O’Toole’s Swann recognizes her for what she is. Exasperatingly loveable. With no hidden agenda. Belle’s agendas are all spread out on the table like a gargantuan canasta hand. “Swanee”, she calls him, leaning in with conspiratorial splendor to ladle out advice. By the end of the dinner party, she’s taken the whole movie on a sidetrip to another galaxy. And when Swann leaves the building, he’s more or less carried along by the whole delightfully preposterous population of Planet Belle.

It’s worth pointing out that’82 saw Kazan adding further luster to her reputation as a dynamic new comic talent. And she managed to do it in one of the year’s ultra-bombs, Coppola’s epic miscalculation One From the Heart. She’s heroine Teri Garr’s best friend – and the one and only source of fun in the whole weary soundstage wasteland. Kazan plays Maggie, plus-size travel agent/cocktail waitress - forever handing out common-sense advice, none of which she’s able to apply to her own shambles of a social life.

The picture’s art-directed to extinction. And suffocates under the weight of Tom Waits’ gloomy songs, which course turgidly through the film like embalming fluid. I mean, imagine putting Lainie Kazan into a musical film and then not letting her sing!. As a musical, the film only works during a brief, silhouetted tango - tightly choreographed and expertly danced by Garr and Raul Julia. A big, misbegotten production number on the "streets” of Las Vegas is an all-out embarrassment – like a conga line breaking out at a funeral.

But bobbing in and out of the picture – all too infrequently – Kazan somehow dodges the stun-gun pellets that level everyone around her. Whether hysterically heading out at 3 a.m. to meet some bum, or extending an eloquent arm from her door to reel in consolation prize Harry Dean Stanton, she’s a keeper.

But it’s Belle in My Favorite Year that gave Lainie Kazan her definitive showcase. And it’s the Kazan performance that was widely seen in ’82. People still nod fondly when it’s mentioned. It’s become her signature role. She even reprised it in a Broadway musical version of the film some years later. How she eluded an Oscar nomination is anybody’s guess. But it’s a performance that's lived on. And I wouldn’t be a bit surprised to learn that 1982 stands as Lainie Kazan’s own favorite year.
Posted by CanadianKen at 10:06 AM

I think Kazan went on for Barbra one night, when she had a 104 degree fever--or it may have been a matinee. It's told she thought she might go on, and had every agent in town in the place and called anyone she knew, and then Barbra pulled through at the last minute, but Kazan went on the next day. I'm not sure if she took over for her or not when she left, but it's a great story that she called everyone in town.

Thanks for sharing the story. Somehow it seems just right - for Lainie Kazan AND for Belle.

Remeber watching Year when it first came out, and Kazan received incredible audience feedback for her work (but then again, so did Lesley Anne Warren the first time I witnessed her out-there Victor work in a theater- I agree both stock characters are broadly written, but Warren's a major talent and, like Kazan in Year, she develops a strong rapport with the audience, and brings off Norma with a great deal of comic style and verve).

No argument here on Warren's status as a major talent. I felt like a rat panning her Norma 'cause I'm a fan and have enjoyed her in so many other things. Guess I'm just a tough sell on this particular stock character. I'm not even that floored by Jean Hagen in "Singin' in the Rain". But I know it's possible to spin this stereotype into something special. Barbara Nichols probably represents the gold standard here. But I also have fond memories of 50's beauty Roxanne Arlen as a gangster's moll (also called Nichols, as it happens - Perky Nichols) in "The Best Things in Life are Free". And, if I remember correctly, Jennifer Tilly managed to wring some amusing notes out of it in "Bullets Over Broadway". But, for me, Lesley Ann Warren didn't add a thing except an awful lot of wasted energy. Wasted on me, anyway. Obviously, though, it tickled a lot of people - some consider it her shining hour. What can I say except that I'm happy for her.
P.S. Watch for a definitive Barbara Nichols spin on the type in "Who Was That Lady", a Dean Martin-Tony Curtis comedy due out on DVD in a month or two. The sole reason to recommend it is the sideline teaming of Nichols and her perfect cohort, the irreplaceable Joi Lansing. They don't get much screen time. But what they do with it makes the movie essential viewing.